Skip to main content
description generale
A total of 500 container-based toilets were installed and operated in Kakuma Refugee Camp during the project. 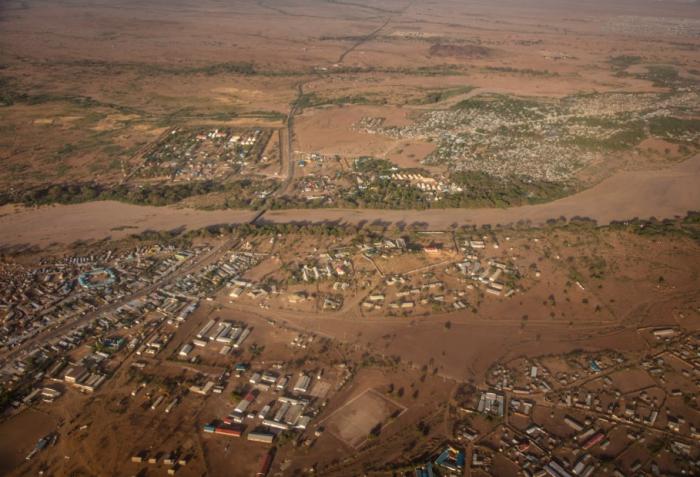 Organisation that implemented the case study

Location of the case study

Design and Engineering Specialist
FSM specialist for operation and maintenance

2 m³/day
Location of the case study

Description of the emergency context

Kakuma Refugee Camp is located in Turkana County in the arid northwest of Kenya. The total camp population as at March 2019 was just under 150,000, comprising just under 30,000 households. The standard sanitation intervention there, as in most refugee camps, is a basic pit latrine. The pit latrines comprise an unlined pit up to 5m deep, a dome-shaped concrete slab, and a superstructure built from either wooden poles and corrugated metal sheet or, with a recently introduced self-build approach, mud bricks and a sheet metal roof. The pit is abandoned when full and another pit is dug within the compound. Households are instructed to reuse the concrete slabs and superstructure. The Kakuma camps has difficult ground conditions (high groundwater table, flood prone, hard rocky ground, etc).

Description of the treatment process

Sanivation designed an above-ground household toilet that contained faeces safely and could be regularly emptied. By being above the ground, the toilet avoided pit digging, mitigated the risks of the toilet overflowing into the environment and/or contaminating groundwater. The ability to regularly empty the toilet increased the lifespan of the toilet and decreased the need for space to build new ones, ultimately saving precious land space in a congested area.

The waste treatment facility designed, installed, and operated by Sanivation had a capacity to treat two tons of faecal sludge
daily, or approximately 1,000 people’s sludge per day. The system was built inside of 40 ft shipping container for mobility and ease of installation. The collected faecal sludge was heated to temperatures above 65oC for a minimum of three hours to sterilize the waste. Then, the treated waste was mixed with charcoal dust, a waste product from the production of charcoal. This mixture of treated human waste and charcoal dust was then pressed and dried to produce sustainable charcoal fuel compatible with refugee stoves. 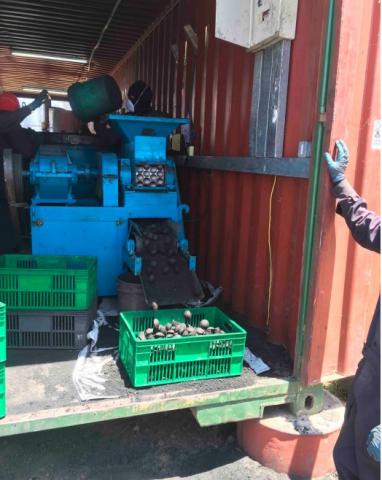 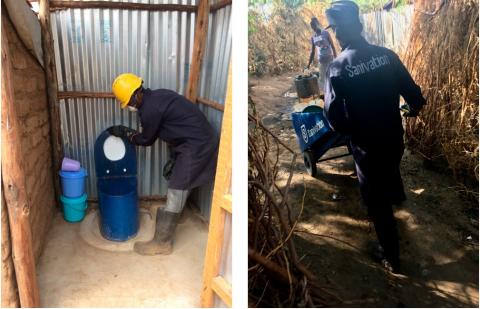 Waste was collected by trained refugee employees who travelled to each household twice a week. The collected was consolidated in 60 litre plastic barrels and transferred via tuktuk to Sanivation’s treatment site located just outside of Kakuma 1. 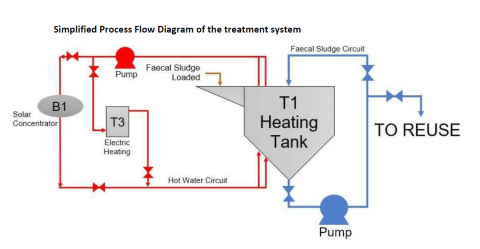 Users of the new container-based toilet system had a 95 per cent user acceptance rate and an independent evaluation found that 80 per cent of respondents preferred the Sanivation toilet to the pit latrine they used previously.

Similar to pit latrines, children under 5 years of age were prone misusing the toilet, or not using it at all. Unlike pit latrines, however, the elderly and people with physical disabilities found the container-based toilet system particularly amenable.

While there were some complaints of odours, overall users found Sanivation’s toilet to be more hygienic than pit latrines, and less prone to insect nuisance

The need for continual biweekly emptying constituted a perceived vulnerability of the system, yet over the 3 years of the project Sanivation demonstrated reliable emptying and collection operations. Less than 1 per cent of scheduled collections were missed and missed collections were identified and promptly corrected. Flash floods were the main cause of the 1 per cent delays.

The treatment plant was run daily by 10 refugee staff. 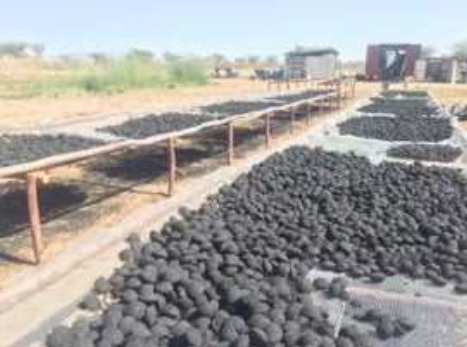 One of the principal outputs for the project was a financial model of this solution. The model indicated that the service as implemented in Kakuma Refugee Camp was more expensive than the modeled pit latrine and double vault UDDT. However, the container-based toilets to briquette model brings additional environmental and livelihood benefits that may be more cost-competitive under the right market conditions.
The host government, with the support of humanitarian and development actors have a role in providing de-risking arrangements for the private sector. The domestic energy market in Kakuma is impacted by regular provision of free firewood and refugees have limited cash funds to make supplemental fuel purchases.

The Sanivation site in Kakuma treated over 250 tons of human waste and produced over 150 tons of fuel briquettes over the 3 years of the project. The treatment plant was run daily by 10 refugee staff. By carefully controlling the production process, Sanivation was able to produce a briquette that burnt 1.5 times longer, boiled 2.5 litres of water in 10 per cent less time and produced lower smoke emissions than traditional charcoal.

The model indicated that the service as implemented in Kakuma Refugee Camp was more expensive than the modelled pit latrine and double vault UDDT. However, the container-based toilets to briquette model brings additional environmental and livelihood benefits that may make it cost-competitive under the right market conditions.

On top of the usual challenges of user acceptance, behaviour change and technical design that come when introducing new sanitation systems, the operation had to deal with the sales/distribution and marketing of briquettes, ensuring supply chains for two feedstocks (charcoal dust and faecal sludge) and technical challenges with the briquette fabrication process. 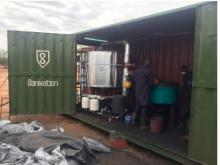 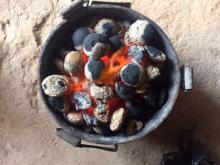